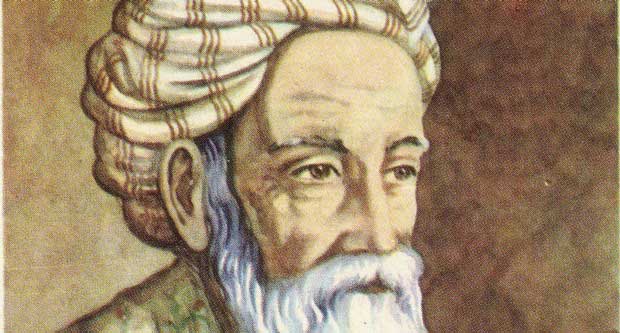 Omar Khayyam was a great mathematician of the 11th century who also contributed in the fields of poetry, astronomy and philosophy. He was born in Persia on May 18, 1048 in the city of Nishapur which is now located in Iran. His full name was Ghiyath al-Din Abu’l-Fath Umar ibn Ibrahim Al-Nishapuri al-Khayyami while his father’s name was Ebrahim Khayyami who was either a physician or a tent maker; it is not exactly known.

Omar studied from different renowned teachers in his childhood including Bahmanyar bin Marzban who was a Zoroastrian and taught him science, philosophy, and mathematics. Prominent Muslim teachers included Khawjah al-Anbari for astronomy, Sheikh Muhammad Mansuri and Mowaffaq Nishapuri.

Omar then moved to Samarkand for higher studies in 1068. There he got a position in the King’s treasury but continued working in mathematics. While his stay there, he made major contributions in the field of algebra and got his treatises published as Risālah fiʾl-barāhīn ʿalā masāʾil al-jabr waʾl-muqābalah or Treatise on Demonstration of Problems of Algebra and Balancing in 1070 which proved to be a milestone in his success as a mathematician. In this, he devised a geometric method for solving cubic equations through intersection of parabola and circle.

Impressed by his work and capabilities, the Sultan of the Seljuk Empire and his vizier (Malik Shah and Nizam al-Mulk) invited Omar to Persia in 1073 for an astronomical work; the preparation of a calendar. Working with other scientists, Omar carried out observations and measurements in Esfahan, Persia and constructed the Iranian calendar which we now know as the Jalali Calendar. Through this work Omar made prominent discoveries like 365.2422 days form one year and there were 8 leap years in every 33 years. Based on the calculations made by Omar, the Gregorian calendar was built around 500 years later.

Making yet another major contribution as a mathematician, Omar stepped into geometry and attempted a work through the fifth postulate; the parallel postulate from Euclid’s postulates that had been presented in 300BC. In his publication Sharh ma ashkala min musadarat kitab Uqlidis (On the Difficulties of Euclid’s Definitions or Explanations of the Difficulties in the Postulates in Euclid’s Elements) in 1077, he gave an alternate explanation for the parallel postulate rather than proving it but this attempt opened the path of non-Euclidean geometry for the future mathematicians.

Omar had become good friends with Malik Shah during his time in Esfahan and was able to produce a lot of scientific work with him, but the death of the Sultan and his vizier in 1092 marked the start of difficulties for him. Malik’s widow and some other people turned enemies towards Omar which led him into hiding. Later, he went back to his hometown Nishapur where he started teaching and working as an astrologer.

Besides a mathematician and astronomer, Omar was also a great poet. He had written many Rubaiyat or quatrains (poetry of four verses) but never got them published in his life. His writings were later found and introduced to the world through their translations done by different poets in various languages. One of these poets was Edward FitzGerald who not only translated them in English, but brilliantly combined the rubaiyat that he found coherent into consistent poems and published them as The Rubáiyát of Omar Khayyám. It proved to be the major source of making Omar’s poetry famous in Iran as well as many European countries in 1859.

Omar Khayyam died on December 4, 1131 at the age of 83 in Nishapur. He had chosen the location for his burial himself before his death, where a tomb was built for him.