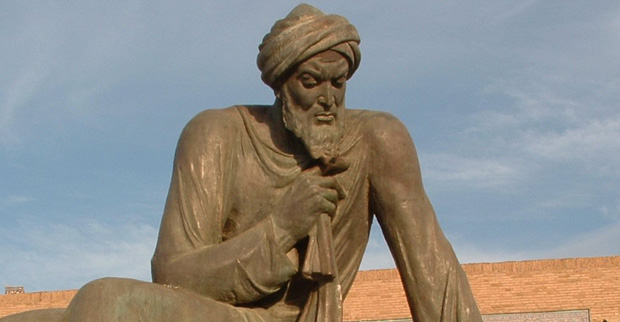 Al Khwarizmi was a nineteenth century eminent and multi-faceted Persian mathematician, geographer and astronomer. In the House of Wisdom of Baghdad he was a scholar. His works was brought to Western World through Latin translation that had been conducted in the 12th century. The work on Arabic numerals highlights the decimal positional number system. Moreover, the first systematic solution of linear and quadratic equations was presented in his book The Compendious Book on Calculation by Completion and Balancing. For his astounding amount of influential work in mathematics especially, he is deemed the father of algebra. Besides mathematics, he left his imprints on the field of astronomy and astrology as well.

Muḥammad ibn Mūsā al-Khwārizmī was born in 780 in Khwarezm, Greater Khorasan, Persia. There is not much known about Khwarizmi’s life that can be recounted with absolute surety. He was an orthodox Muslim, a firm believer in Islamic way of life. Ibn al-Nadim wrote a biography on Al Khwarizmi which mainly included the books that he wrote. Most of his achievements dated back to the years 813 to 833. Baghdad had become the center of learning and hub of all scientific studies, subsequent to the Muslim conquest of Persia. A great number of traders, merchants and seekers of knowledge traveled to Baghdad from around the world including Al Khwarizmi. It has been speculated by Douglas Morton Dunlop that he could be the eldest of three Banu Musa, Muḥammad ibn Musa ibn Shakir.

The House of Wisdom established by Caliph al-Ma’mūn appointed him a scholar. There he studied books on mathematics and science. Additionally, he studied the translation of Sanskrit and Greek manuscripts on scientific research. Al Khwarizmi’s work in mathematics, astronomy, cartography and geography laid the foundation for further development in trigonometry and algebra. The solution to quadratic and linear equation was an essential step in the derivation of the algebraic field. Around 825 c. he wrote On the Calculation with Hindu Numerals, which played a pivotal role in the spread of Hindu–Arabic numeral system outside of Persia.

Al Khwarizmi’s work was mostly derived from Greek mathematics, Indian numbers and Babylonian and Persian astronomy. He was also familiar with classic Greek mathematician. Ptolemy’s work on the African and Middle Eastern locations had been adopted, systematized and eventually corrected by him. Kitab surat al-ard which translates as “The Image of the Earth” was another key work of Al Khwarizmi based on Ptolemy’s Geography. It improved upon the data given in the book and enhanced the features of Africa, Asia and Mediterranean Sea. Besides, the caliph al-Ma’mun commissioned 70 geographers including him to help determine the circumference of the Earth and to construct a world map.

Moreover, he is accredited for advancement in European mathematics by means of his contribution through books which were subsequently translated into Italian. He also made mechanical devices and gadgets like sundial and astrolabe the subject of his books. The term ‘algebra’ was derived from one of his books which described a basic operations with equations as ‘al-jabr’ which means restoration. The Italian translation of his book was conducted by Robert of Chester as Liber algebrae et almucabala. That is how the word algebra was coined which was inspired by the Arabic word al-jabr. The book dealt with detailed account of the fundamental methods of reduction and balancing and solving polynomial equations.