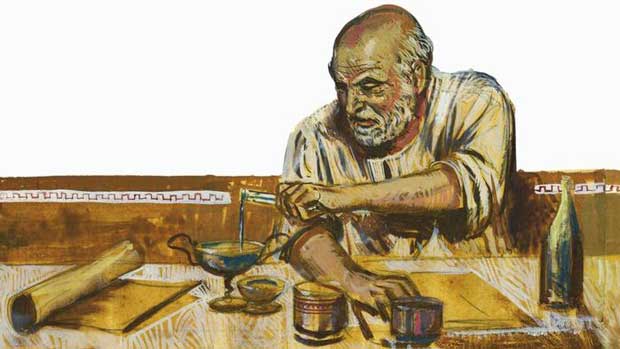 Archimedes was a celebrated ancient Greek mathematician. Besides being a mathematician he was a great engineer, astronomer and physicist. Similar to his contemporaries and successors, there is very little known about his life. He is considered one of the leading specialist in classical antiquity and a mathematician of that field. His accomplishments include his input in the foundation of calculus, and application of the method of exhaustion. Also he was enthusiastic about solving geometrical theorems. Moreover, he derived approximation of a pi which was accurate. He made use of mathematics in the physical phenomena, rendering him the first mathematician to do it.

It is reported that Archimedes of Syracuse was born in c. 287 BC in Sicily. A Byzantine Greek historian, John Tzetzes estimated that Archimedes lived for 75 years. There is not much known about his father except that he was an astronomer, Phidias. The information was collected through Archimedes book, The Sand Reckoner. Other sources like Plutarch speculated that he was related to the ruler of Syracuse, King Hiero II. A biography written by his friend, Heracleides, on his life could not survive through the ages which would have helped shed the light on the major events in Archimedes’ life. However, it is believed that he might have studied in Alexandria, Egypt. Eratosthenes of Cyrene and Canon of Samos were his companion while he was studying there.

The advent of the Second Punic War brought the city of Syracuse under siege when Roman forces attacked the city. The war lasted for two years and claimed Archimedes’ life. Plutarch presented an account of his death as Archimedes was working on a mathematical diagram when the city was attacked. General Marcellus of the Roman arm force demanded to see Archimedes and sent a Roman soldier to bring him. Archimedes declined the soldier’s command explaining he had a mathematical problem to solve. Enraged by his insubordination, the soldier took his life with his sword.

Another less-popular version of his death was also presented Plutarch that Archimedes was slain while he was trying to surrender. In this version Archimedes was collecting his mathematical tools which the soldiers mistaken for valuable items and killed the mathematician. This unfortunate incident infuriated the General Marcellus who specifically ordered not to harm the scientist. The last words became quite popular that allegedly Archimedes uttered, “Do not disturb my circle.” There is a sculpture illustrating his most favourite mathematical proof that has been placed on his tomb.

Archimedes discovered the method of measuring the volume of an irregularly shaped object. There is an anecdote how he discovered that method. According to a source, King Hiero II was asked him to see his votive, pure gold crown for any impurities, specifically silver, as he did not trust the goldsmith. The challenge was to determine that without damaging the crown and the only way to do it was by melting it to determine its density. He stumbled upon the method of calculating the density of the crown when he was taking a bath. He realized that his body mass made the water rise up so he applied the same method to determine crown’s density. Turned out the density of the crown was lower when submerged into water which meant that indeed less dense matter was added to it.